Book Review: THROUGH THE STORM by Beverly Jenkins 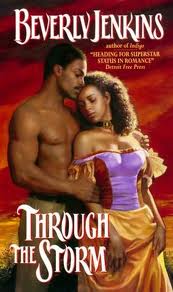 From Beverly Jenkins Online!
Raimond Le Veq needed to marry to gain his inheritance and restore the fortunes of the House of Le Veq, the proud Black New Orleans family whose wealth had been ravaged by the War Between the States.  Still wounded by the double-cross of the only woman he ever came close to loving, he gave the choice of bride to his mother.  But he never expected that she would pick Sable Fontaine — the beautiful former slave he could not allow himself to trust again.
Betrayed and sold to a cruel neighbor, Sable did whatever it took to escape.  With the spirits of her royal African ancestors guiding her, she made a bold bid for freedom and won.  But along the way she had to hurt the charming Union Major Le Veq, who had romanced her and championed her.  Now fate has brought them back together in a marriage of convenience.  Can she convince Raimond she was never a rebel spy, and that this time, she’d choose him above all else?
My thoughts…
The book opens in Georgia in 1864.  Sable Fontaine, a house slave sold for $800 to an evil man, escapes.  Along the way, she meets Raimond Le Veq at a slave camp.  Immediately lured in my Sable’s green eyes, Raimond falls for her.  When Sable’s freedom is threatened, she takes off rather than risk being sent back into slavery, leaving an angry and heartbroken Raimond behind.
Years later, the two meet again in New Orleans when Raimond’s mother introduces Sable to him as the woman she wants him to marry.  Raimond cannot hide his anger at Sable, but agrees to the marriage.  Although Raimond doesn’t trust her, he can’t help but be intrigued by her.  Eventually, the marriage of convenience turns into one of love.
Sable was a remarkable, resourceful, intelligent woman.  She was a descendent of African Queens, and through her story, I learned about African royalty.  Raimond was a brat, but he was HOT! He was so tender, so fiercely loyal, so dominating (in a good way)… I couldn’t help but love him. The two scorched up the pages.  Amidst the turmoil in their lives, they manage to get past the hurt and anger and just revel in their love for each other.
There was never a dull moment with this delightful cast of characters.  In this book, Ms. Jenkins, introduced us to the Le Veq clan.  (Well, maybe reintroduced for those of us who’d read Indigo.)  The Le Veq brothers were equally handsome yet completely different from each other.  They also provided a bit of comic relief. And just so you know, the Le Veq brothers are also featured in Winds of the Storm and Captured.  Also, Ms. Jenkins gave us a treat by bringing Galeno and Hester Vachon (from Indigo) back to life and giving us a glimpse into their life during this period.
Beverly Jenkins is an exceptional writer with a knack for storytelling.  I guess it should be no surprise that I loved this book.  Through the Storm was so awesome, I read again after I finished—just in case I missed something.  Once again, I was transported into a world I could only imagine in my dreams.  Ms. Jenkins does a wonderful job of capturing a reader’s attention with vivid imagery, memorable characters, and Black history.  I highly recommend Through the Storm to anyone looking for a fabulous, historical romance.
My rating: 5 stars