When You Are Mine by Kennedy Ryan: A DEBUTVERSARY BLITZ

We are pleased to celebrate the one-year anniversary of Kennedy Ryan’s debut, WHEN YOU ARE MINE!

Make sure to check out the rafflecopter giveaway!

AND…only if you’ve read WYAM, click at the very bottom of the post  to catch up with where the characters are now! ***Spoilers if you haven’t read!!!***

“Ryan’s debut is rife with sexual tension, while her easy style and likable characters bring this unpredictable love triangle to life.” —Karina Halle, NYT and USA Today Bestselling Author of The Pact

“When You Are Mine is exactly what I look for in a romance! Achingly beautiful with palpable, real characters, you cannot help but completely fall in love with. I cannot wait for more!”

–A.L. Jackson, NYT and USA Today Bestselling Author of Take This Regret and Lost to You

“Holy hot love triangle! When You Are Mine is a beautiful, yet tragic, intense yet gentle story that grabs you immediately and does not release until the very end. I know a lot of readers get turned off by a love-triangle, but rest assured this one just works perfectly.”

–Brandi, Talk Books To Me

“You know the writing is suburb when you can laugh and cry and get so angry at the characters…My hands were shaking when I started writing this. I screamed at the ending. Going to end with BLOWN AWAY!!!” 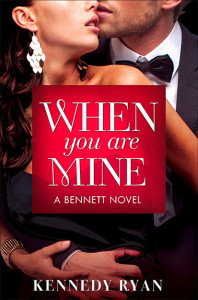 Forever is a heartbeat away . . .Kerris Moreton knows how to make things work. Bounced from foster home to foster home as a kid, she adapted; when opportunity arose, she thrived. Now, about to open her own business and accept a marriage proposal, Kerris is ready to build the life she’s always wanted. The only thing missing? A passionate connection with her would-be fiancé, Cam. Kerris wants to believe that sparks are overrated-until Walsh Bennett lights her up like the Fourth of July

…but what about love?

As one of the East Coast’s most eligible bachelors, Walsh enjoys financial independence, fulfilling work with his family’s nonprofit, and plenty of female attention. But lately he’s been distracted by the one woman he can’t have. Lovely to look at and even sweeter to know, Kerris is the soul mate Walsh never thought he would find. The problem is, his best friend found her first . . .

To say that I’m a person who loves to read about love triangles is a vast understatement. I love to be immersed into the emotions of each character. I want to root for both couples. I need to see the good in all characters, understand their emotions leading up the final choice. There is just something about taking the ride, learning about all points of the triangle that draws me in every time.

I have to say, When You Are Mine by Kennedy Ryan, was one heck of a ride! I enjoyed it from beginning to end. It was a fast-paced read with a vivid cast of characters. Ms. Ryan pulled me into the world of Walsh, Cam, and Kerris. I felt like I was in the thick of the action. Walsh was the quintessential golden boy—handsome, rich, and educated. Cam was the man who came from nothing and made a good life for himself. Kerris and Cam had similar experiences in life. They both grew up in the foster care system, they both had gone through unspeakable things. The relationship between Kerris and Cam seemed to be a perfect match—until Walsh entered the picture.  While Cam is the man Kerris feels she needs, Walsh is the man Kerris wants. They connected instantly, the attraction was sizzling, and I was hooked from their first meeting.

When You Are Mine will tug at your heartstrings and take you on a journey. I laughed, cried, cheered, and shouted. Mr. Ryan did an amazing job! 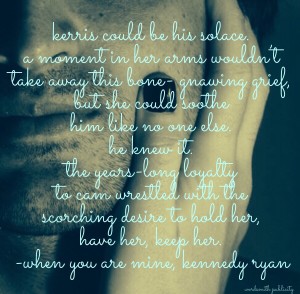 Click HERE for update on where life is now…MAJOR SPOILERS!!! Bonus material only for those who have read books 1 and 2!!!

BE MINE FOREVER Available Now

Kennedy Ryan  always give her characters their happily ever after, but loves to make them work for it! It’s a long road to love, so sit back and enjoy the ride. In an alternative universe, she is a wife to the love of her life, mom to a special, beautiful son, and a friend to those living with autism through her foundation serving Georgia families. Her writings on Autism have appeared in Chicken Soup for the Soul, and she has been featured on the Montel Williams Show, NPR, Headline News and others. Ryan is donating a portion of her proceeds to her own foundation and to her charitable partner, Talk About Curing Autism (TACA).

Her interview series MOMMIES DO THE MOST AMAZING THINGS is featured each month in Brooke Burke’s online magazine Modern Mom.