FOREVER WITH HIM Spotlight & Excerpt!!!

I’m pleased to spotlight Sofia Tate’s latest release, FOREVER WITH HIM! I met Sofia a week or so ago and she’s such a lovely person! I’m excited to share her new release with you all! 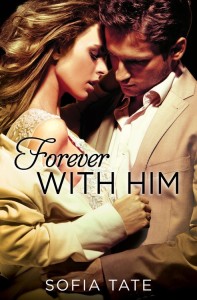 About FOREVER WITH HIM
Allegra Orsini’s dreams are all coming true. She’s making her debut at the Metropolitan Opera-and marrying Davison Cabot Berkeley, the brilliant billionaire and masterful lover who’s unlocked her most secret desires. From the glittering lights of the opera hall to the sultry shadows of a honeymoon suite, Allegra has all she’s ever wanted . . . until one moment changes everything.As despair darkens their once perfect world, Allegra pulls away from everything and everyone she’s ever loved, including Davison. But Davison refuses to give up on her-or the pure, raw passion that still burns between them. Allegra may have lost herself, but Davison knows right where she belongs, and he’s determined to prove it to her.
BUY FOREVER WITH HIM here:
Amazon: http://amzn.com/B00S5A6HRM
B&N: http://bit.ly/1MWjfl3
iBooks: http://apple.co/1LT8Tn7
Kobo: http://bit.ly/1IzpGLP
Goodreads: http://bit.ly/1OQRZpo
An Excerpt

Watching my fiancé, Davison Cabot Berkeley, standing in front of the mirror in his walk-in closet adjusting his bow tie while wearing a custom-tailored black tuxedo is an exercise in torture.

He stands ramrod straight, his emerald eyes, full of determination and focus, practically etching a mark in the glass. His chiseled jaw is locked. He wants to look perfect, and all I want to do is rip off the tie, pull apart his pristine white tuxedo shirt, sending its buttons scattering across the closet floor like pebbles, slam my lips over his, and plunge my tongue into his mouth. Then, once his broad, muscled chest presents itself to me, I’ll run my tongue and hands over it down to the bulge enveloped in the soft, silky fabric of his trousers, unzip them, and sink to the carpet until my knees hit as I take his hot, velvety cock into my mouth and…

“If you don’t stop ogling me like that, Venus, I’ll have no choice but to fuck you right here in this closet.”

His declaration snaps me back to the present, which works so effortlessly when he says it addressing me with his preferred nickname for me, and with that low rumble in his voice that makes me wet at the sound of it.

“I didn’t realize you saw me standing here.”

He pivots to me to stare at me full-on. “Baby, I don’t have to see you to know you’re near me. I just know.”

I smile. “Goes both ways, Harvard.”

I step over to him. He positions me in front of the mirror with him behind me, his warm breath in my ear.

Finally, after a pause, I hear him take in a breath. He runs his hands over my dress, a deep red strapless gown that matches the ruby ring I always wear on my right hand, the one Davison gave me in Venice when we rode under the Bridge of Sighs in the gondola.

“God, you’re so beautiful. How did I get so fucking lucky?” he murmurs in my ear, gripping my body tightly to his.

The warmth of his lips descends on my neck as his mouth begins to suck softly on my flesh. “Ha! Hardly!” he mumbles under his breath.

My head lolls back onto his shoulder, savoring the feel of his touch. “Hmm, you might have a point there.”

I can feel his heartbeat increasing against my back. My core clenches as I grow more aroused with each pull of his lips on my neck. His hands roam over my chest, holding my breasts in his hands. His body vibrates behind me in a low moan as his thumbs stroke my nipples, which instantly harden under my dress.

The sound of a phone pinging in the bedroom forces Davison to pull away, both of us groaning in annoyance.

Davison follows me back into the bedroom and watches over my shoulder as I pick up my phone, grunting his annoyance. “Christ, can’t he leave you alone for five minutes?”

I exhale in exasperation as I watch him pick up his wallet and phone from the nightstand. “We have to leave in five minutes,” he announces.