RELEASE DAY! My Soul To Keep by Kennedy Ryan 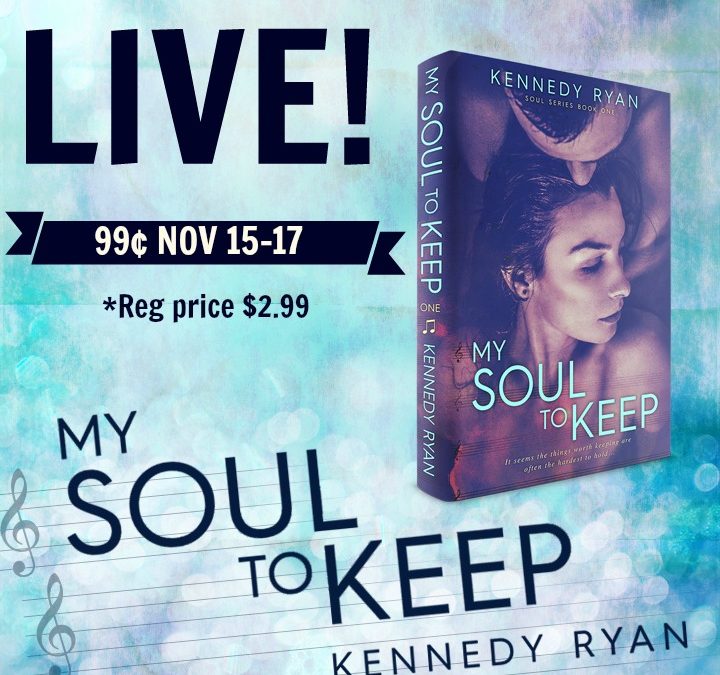 I had two things in life that mattered. My mother and my music.
Mama was taken from me too soon, and now music is all I have left. It’s the thing that’s pushed me right out of backwoods Georgia into Los Angeles, where the line between fantasy and reality shimmers and blurs. I’m finally making my way, making my mark. I can’t afford to fall for one of music’s brightest stars. Not now. Music is all I have left, and I’m holding on tight with both hands. I won’t let go, not even for Rhyson Gray.

I had one thing in my life that mattered – music. The only constant, it’s taken me to heights most people only dream about; a gift dropped in my lap at birth. I thought it was enough. I thought it was everything until I met Kai. Now she’s all I think about, like a song I can’t get out of my head. If I have to chase her, if I have to give up everything – I will. And once she’s mine, I won’t let go.

I shouldn’t have come. All the things I felt and fought, the things I suspected he felt too, he just spewed all over me. And as much as I want to be, I’m not sure I’m ready. I’ll never forget seeing my Mama in bed for days after Daddy left. And even though she got up, I suspect a part of her never left that bed, but just stayed there, waiting. We had to leave the house where she grew up and where I spent my first years, because Daddy left us with nowhere to go. Mama learned to stand on her two feet, and I’ve done the same. I just didn’t count on Rhyson sweeping me off of them.

“We’re obviously on different pages about this.” I pull my hands free and turn to leave, but he steps in front of me, blocking my grand exit. “Let’s talk later.”

The heat of his body grabs me before his hands do. He traps my chin between two fingers, taking my mouth in a paradox of rough and tender. I want to move. To slide away from his body pressing me into the pool table. But I can’t. Not with his hand caressing my back. Not with his tongue in my mouth. Not with his erection pressing into my stomach. I can’t. I won’t. I have been denying myself this, and I’m so damn hungry. My mouth opens under his, ravenous and wet and hot. His groan vibrates against my lips.

I strain up on tiptoes, clawing my fingers into his dark hair, forcing him closer. He lifts me onto the pool table, planting himself between my knees. His fingers skim my bare thigh, working up my leg until he reaches a damp patch of silk. He pushes my panties aside, rubbing his hand into the wet flesh there before sliding one long finger and then another inside of me. I rock into these fingers which have awed millions with their skill. They own me. I’m the instrument in his hands. He’s playing me. Plucking at me. Strumming me.

He tugs at the wide neck of my sweater until it falls away from my shoulder, slipping his hand in and cupping my naked breast. He brushes his fingers over my nipple, and I lose my mind and every inhibition. My head flops back and I stretch my legs wider, offering him anything he wants.

“Are you kidding me?” His question burns the vulnerable curve of my neck as he drags his lips to my shoulder. “You come here wearing no bra and think I won’t…”

He abandons the words, his dark, untidy head disappearing under my sweater, and before I have time to regain even millimeters of sanity, my nipple is in his mouth and he’s suckling me. Not gentle. Not soft. My breasts are so small, he almost eats me whole. Every draw, every suck, every bite sends a power surge to my core until my knees hold his hips in a desperate grip, and my nails rake across the flat surface of the pool table behind me.

His mouth at my breast. His fingers inside me. His clean scent surrounding me. I have nowhere to hide anymore. I am exposed. I want to spread myself wide open for him. That voice that has been telling me I can’t rely on him. I can’t trust him. I can’t need him—that voice is stunned into silence by his thorough possession of my body, by the inferno between my legs, blazing a hole right through my soul and scorching my heart.

I just can’t write about myself in third person for one more bio! I’m a wife, a mom, a writer, an advocate for families living with autism. That’s me in a nutshell. Crack the nut, and you’ll find a Southern girl gone Southern California who loves pizza and Diet Coke, and wishes she got to watch a lot more television. You can usually catch me up too late, on social media too much, or FINALLY putting a dent in my ever-growing To Be Read list!